Lets be honest, we are surrounded by distractions: the phone is beeping, the program that you want to watch is starting, the dog started to chase a fly around the home, the boy needs help with his homework… when you least expected, you start smelling something burning. You run to the kitchen but it is too late, there is smoke everywhere and you dinner is slightly black and inedible.

Luckily, it will be just a scare and some cursing, but sometimes this might be a bigger issue.

AXA, an Spanish insurance company, analysed their reports from 2019 and discovered that 74% of the fires were due to a forgotten pan on the stove top.

According to the Emergency Department from Beaumont, Texas, two thirds of the home fires start in the kitchen, causing 480 death yearly just in the USA.

Moreover, we checked another report by the National Fire Protection Association that investigted kitchen fires in 2019. They notify that most of the fires happen during Thanksgiving and Christmash. Between the 2013 and 2017 there were in average 470 kitchen fires dialy, with a total of 173,200 yearly. From those, 31% was due to leaving the kitchen unatended and then somethings catching fire (foods, fats or equipment). 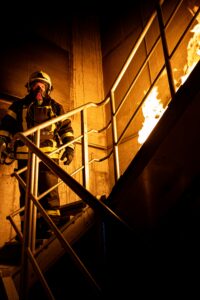 Foto de Tobias Rehbein en PexelsAnd even though most kitchens had fire alarms (87% of the cases reported and 70% of the deaths), they explain that sometimes it was too late.

The kitchen tops were the cause of 62% of the fires, 89% of the deaths and 79% of the injured. Another Fire Department from Massachusetts decided to modify the stoves of flats for elderly adults with low income. The people that they chose for the test had on average 12 fire repot per month in 2015. They modified 800 kitchens to avoid getting too hot. Surprisingly, this modification led to 10 months without fires.

As you can see, cooking isn’t a game. Even when we have an alarm, when it detects the fire it might be too late. Firstly, we should never stop paying attention to what we are cooking. However, we are humans… and a little help is always safer.

This website uses cookies to improve your experience while you navigate through the website. Out of these, the cookies that are categorized as necessary are stored on your browser as they are essential for the working of basic functionalities of the website. We also use third-party cookies that help us analyze and understand how you use this website. These cookies will be stored in your browser only with your consent. You also have the option to opt-out of these cookies. But opting out of some of these cookies may affect your browsing experience.
Necessary Always Enabled
Necessary cookies are absolutely essential for the website to function properly. This category only includes cookies that ensures basic functionalities and security features of the website. These cookies do not store any personal information.
Non-necessary
Any cookies that may not be particularly necessary for the website to function and is used specifically to collect user personal data via analytics, ads, other embedded contents are termed as non-necessary cookies. It is mandatory to procure user consent prior to running these cookies on your website.
SAVE & ACCEPT
Do you want a treat?

We will let you know what is coming soon,

help us picking the next recipes or

suggest us recipes to make with Burnometer!